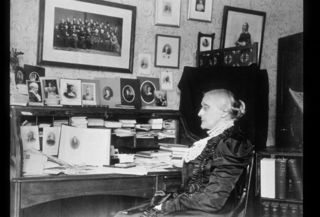 Susan B. Anthony and her chosen family of international feminist activists

INSPIRING AND IRREVERENT WOMEN’S HISTORY. THE SHOULDERS WE STAND ON: WOMEN AS AGENTS OF CHANGE (program)

THE SHOULDERS WE STAND ON: WOMEN AS AGENTS OF CHANGE

A LECTURE/SLIDE SHOW BASED ON THE AMERICAN WOMEN’S ALMANAC


A program that has inspired audiences at conferences, on campuses and in communities across the country.

“I've always been a translator of sorts between academic work and what Virginia Woolf called “the common reader.” I want to honor and witness the women's movement I've seen and which has entirely changed the world. I want, also, to humanize politics, bring it to life, people it with breathing souls. Mostly, I'm writing and speaking against the grain, against amnesia and disinformation, especially against distortions about race. I hope to remind one generation of what we have lived and tell another generation what I think it means.”

Louise Bernikow
Full of a scholar/participant’s insights into American women’s history, especially the lessons learned from “agents of change” in the past and similarities between “then”, whether it be the 72 year battle for the vote, workers’ strikes, the campaign against lynching or the protest against the Miss America Pageant-- and “now.”

100 glorious images, most never seen before, tell the vivid stories of 19th and 20th century women’s movements, including:

- all the ways in which the heritage of “pushing the envelope” is something to be proud of.

The program generally lasts an hour with time afterward for questions and discussion.

It has been seen from Maine to California, in places as varied as Covenant House for teenage runaways or the Matilda Jocelyn Gage home and research center in upstate New York, for audiences as varied as educators, ex-felons, foundations and university communities.