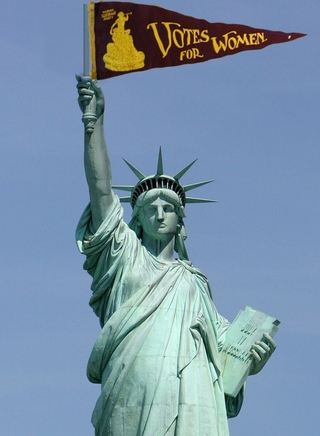 Please join me on Tuesday September 20th @ 8pm to view a segment of the PBS-tv show "History Detectives," where I help unravel the background of a purple and gold "Votes for Women" banner from upstate New York. I describe a resurgent movement for the vote in the early 20th century, the amalgam of race and class that made it work and how the New York win in 1917 was the tipping point in the long march toward the 19th amendment.

Actually, I get to hint at some of those issues-- it's tv! So there will be viewing parties on that night and we can use this blog to discuss the show,the suffrage movement, the history of women in New York or anything else provoked by the segment.
Do you need to find a viewing party in your neighborhood?
Are you willing to host one?
Let me know. Looking forward to restoring a huge piece of our history.
Post a comment