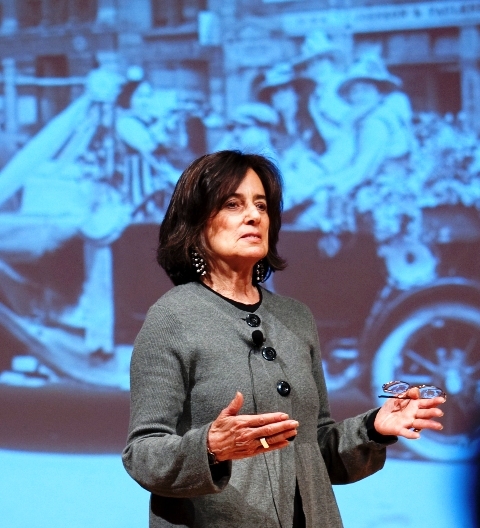 Gotham Center for NY History. Suffragists in the yellow-beribboned auto in a Fifth Avenue parade.

New York City: a hotbed of female activism throughout its history.

New York City: media capital, financial capital. What happens here resonates around the country and across the ocean.

New York in 1917 is the most populous state in the Union and New York City is the most ethnically diverse. In the western states women have won the right to vote, but after the Founding Generation passed on, the suffrage campaign had stalled. In the early years of the 20th century, a new breed amped up the action. Victory for women here will double the number of women eligible to vote in the entire United States.

The long,dramatic history of women's fight for the vote in New York City begins before the Civil War, when a suffrage meeting at the Tabernacle so incites the public that it becomes known as the "mob convention." Later, when Stanton & Anthony seek a publisher for the history of their movement, they find Fowler & Welles, a city business specializing in the "science" of phrenology -- reading skull bumps as keys to psychology-- a firm that also dares to publish Walt Whitman.

By the early 20th century, Fifth Avenue has become a canvas for the unfolding panorama of seamstresses and millionaires, cavalry and automobiles, until marchers number in the tens of thousands and spectators nearly half a million. The Statue of Liberty offers a ready symbol from the day she arrives, a symbol of democracy in a place where democracy does not apply to women. Suffragists make sure the public understands that. Soapboxes on steet corners from Wall Street to 125th Street draw ready audiences of pedestrians. If they don't like the message, they throw eggs or tomatoes or shards of glass or drop water on your head from the buildings above. This is not a "polite" or lady-like enterprise.

If the company advertising on subway platforms supports the antis, women simply have to parade up and down the cars carrying "lapboards" advocating their right to vote, even if their "good" families are horrified.

If a state referendum loses in 1915, you re-group. But the coming of a world war divides the ranks--some suffragists are pacifists too-- others re-frame Votes for Women as a patriotic stance. The Fifth Avenue parades are suddenly afloat with flags and posters for Liberty Bonds. The strategy work. In 1917, a second referendum put before the citizens passes, with New York City voters leading the way, a reversal of previous years' patterns.

If, after victory, the lights go out on the spectacle and the political lessons are lost -- gone missing from New York history, American history and even, in all their nuance and complication, from women's history, fear not. They have all been retrieved. 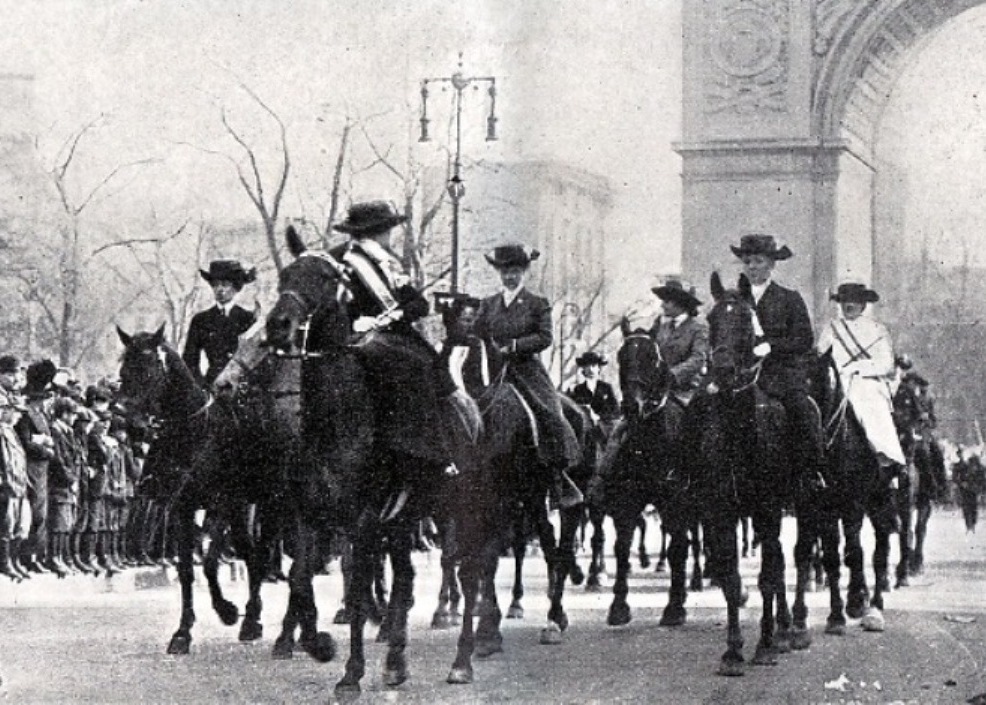 Setting off from Washington Square, 1912.


Help spread the word. Invite Louise to speak to your organization.